Will Hillary Clinton Change Your View of Female Leadership?

Will Hillary Clinton Change Your View of Female Leadership? 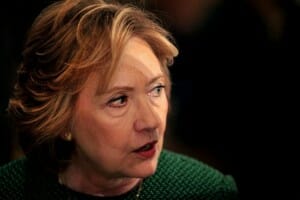 As you know, Hillary Clinton has announced that she is a U.S. presidential candidate, in the running to become America’s first female president. Whether or not she likes it, the topic of gender is going to be part of her campaign, and it will probably be put there by everyone other than her.

Already a team of Super Volunteers, who aren’t part of the official Clinton team, has apparently warned the media on the use of words they believe are rooted in sexism. The Washington Post reports, ‘“So these words are now off the table: “polarizing,” “calculating,” “disingenuous,” “insincere,” “ambitious,” “inevitable,” “entitled,” “over-confident,” “secretive,” “will do anything to win,” “represents the past,” and “out of touch.”’

The volunteers believe that there is a different and more negative meaning associated with these words when they are applied to women. For example, an ambitious man is a natural phenomenon, but an ambitious woman implies that she is a potentially dangerous creature.

There is no doubt that women all over the world are watching this presidential campaign with interest, to see how the U.S. government copes with female leadership.

In Australia we had a small taste of political sexism when Julia Gillard became our first female Prime Minister. Ms Gillard said, “I think for men that conversation starts with what kind of leader will he be? Strong, weak, compassionate, strident. I think for women, it starts with ‘can she lead?’

Women bring a softer range of skills, including compassion, collaboration and the ability to nurture. Benazir Bhutto said, “As a woman leader, I thought I brought a different kind of leadership. I was interested in women’s issues…as a woman I entered politics with an additional dimension, that of a mother.”

Would the Earth tilt from its axis if a leader brought both sets of skills to the role?

While she has proven to be a very strong women, Ms. Clinton would also bring the more feminine qualities to the leadership role. Her struggle will be to find the perfect balance so she retains credibility as an individual and as leader.

While Julia Gillard wasn’t in our top role long enough to make an impact, it’s quite possible that Hillary Clinton can reshape the traditional view of leadership into something that is not gender specific. It will be interesting to see if there is a flow on effect, bringing gender equality to leadership roles and the workplace, and closing the gender pay gap.

Hillary Clinton hasn’t just taken on a presidential campaign; she’s also taken on the hopes and expectations of women around the world. It’s a huge load to bear.

How to Choose the Right Coach for Your Needs

How Sleep Deprivation Affects Your Performance