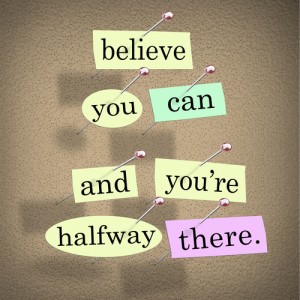 While women make up half of our population, they occupy less than 5% of top leadership roles in companies worldwide. From corporate boardrooms to our highest institutions of education and government, there is now a growing global movement to help women rise to the next level of leadership. Despite the interest of multiple organisations, society as a whole, and various male and female champions attempting to open doors and smooth the way for more women to join the top ranks of leadership, something is seemingly holding back our most educated, talented and capable women.

According to the latest research in The KPMG Women’s Leadership Study, a lack of confidence is one of the primary reasons why there are so few women in the c-suite. Data from the study indicate that from an early age women are discouraged from developing leadership skills. According to the study, “Eighty-six percent of the women surveyed were taught to be ‘nice to others’ growing up and to do well in school. Less than 50% were taught leadership lessons, and less than 34% were encouraged to share their point of view. ”

The Need for Greater Confidence Lasts a Lifetime

The study also indicates that this lack of confidence and encouragement follows women into adulthood and affects everything from the choices that they make to their performance in their careers. “Sixty-seven percent of the women surveyed report that they need more support to gain the confidence necessary to lead, yet seventy-nine percent lacks the courage to seek out mentors. The study also found that a majority of professional women lack the confidence to ask for new opportunities and responsibilities at work, and are too fearful to ask for a promotion or increase in salary.

These findings suggest that it isn’t enough for organisations and their current leaders to confront gender stereotypes and set goals to achieve gender balance, greater inclusion and diversity. Somehow, we must find a way to teach women how to believe in themselves and be confident leaders.

Having a corporate culture that embraces mentoring programs, risk taking and offering flexible work arrangements are all steps that organisations can take to help women gain the confidence that they need to become effective leaders. Women should be encouraged to seek out additional opportunities to strengthen their leadership skills. Seminars and continuing education can also play an important role in increasing women’s confidence and capabilities.

Get in touch today to learn more about how we can help you improve your confidence and other leadership skills with Business Coaching and Mentoring.

Does Our Language Affect Our Leadership Skills?

Female Leadership and the Value of the Human Touch

Should You Speak About Your Success?